A couple of weeks ago I was driving from a hotel in Aldershot to a friends’ house in Leeds. I had never been to Aldershot before and I had never been to this friends’ new house before. The journey in the middle would be fairly straight forward: M3, M25, M1. But I didn’t know the roads either end of that. So, I had Google Maps on my phone to give me directions.

All was going well, until I got to the junction of the M3 and the M25. The junction layout is a complicated swirl of roads, allowing traffic to go outwards in any of the directions. Coming from the West (as I was), I could either carry on East along the M3, turn North on the M25, or turn South on the M25.

Here’s my drawing showing the options I had and where each of the lanes would take me. Essentially the left two lanes are for the M25 North, the third lane is for the M25 South or continuing on the M3, and the right hand lane is just for staying on the M3.

So how did Google maps suggest I navigate this junction? “Stay in the right hand two lanes to remain on M3.” Oh, so it probably wants me to stay on the M3 then. Maybe it’s taking me into central London to avoid the M25 for some reason.

But shortly before the junction I got the next instruction: “Use the third lane to follow M25 South”. Oh, so it’s changed it’s mind. Maybe now it wants me to go the long way round the M25 if there’s a problem on the M25 going north.

But then at the last moment before the North and South routes diverged “Use the left two lanes to take M25 North”. Oh, so it does want me to take the M25 going northwards after all.

It really is a terrible suggestion of which lane to take, giving the wrong lanes and only suggesting the correct one at the last possible moment. It’s not surprising that people end up in the wrong lanes and cutting across other cars when their Satnav tells them to do so.

Of course, I just completely ignored the instructions. I knew what I wanted to do and just stayed in the correct lane throughout.

So on Friday afternoon/evening, we had some heavy snow causing traffic chaos and other problems. Fortunately for me I finish work early on a Friday and was just getting home as the first flakes fell.

I was going to go for a cycle on the Saturday, but instead I decided to make it into a walk. Here are some snow photos I took:

My original intention for my walk was to follow the Rhymney Trail, unfortunately I didn’t cross a bridge that I had to and walked down the wrong side of the river before getting trapped and having to turn back. Anyway here’s some fancy GPS stuff I did on my phone:
[flv:http://adrianyoung.org/blog/wp-content/uploads/2010/11/20101127_walk.flv 480 360] 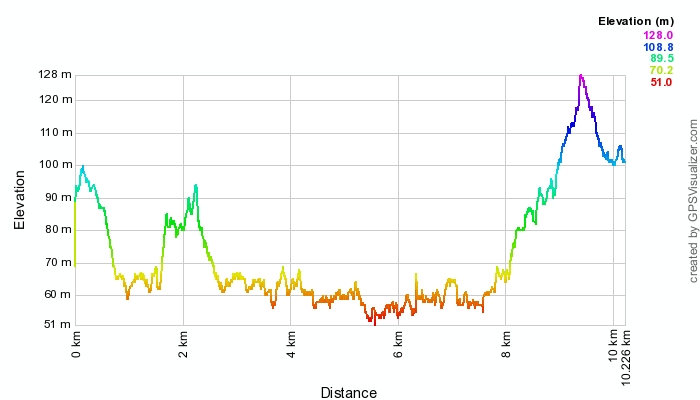 So, on Saturday evening I went to a pub. Now that’s not the unusual part of the story that needs writing about.

The reason for this pub visit was due to my brother-in-law being in Sheffield so I couldn’t really pass up on the chance of meeting him. Sheffield’s a big place, how would I know where he was? How did they do it in the olden days? I guess people would have to have found a payphone and made a phone call. Assuming they could remember exactly what phone number they wanted. It seems possible but a bit of a faff. [As a side note, my Mum always told me to carry 10p for use in this sort of situation when I needed to make a phone call.] How did I do that the other day? We’re both BlackBerry users and with the BlackBerry Messenger app we get free instant messaging. Problem solved.

Ok, skipping that step, I now know which pub he’s at (assuming he hasn’t moved on). He’s at the Gardener’s Rest pub. It’s somewhere in Sheffield, but he has no idea exactly where that is. I’ve never heard of it in my life. How did they do it in the olden days? And here’s where I get stuck. What would they have done? The only thing I can think of is to look it up in a phone book. Then what? Find my A-Z map and look it up. How about getting there? Take the map with me? Leave it at home? How did I do that the other day? Going back to my BlackBerry I fired up Google Maps. [Sidenote: This is the only place I use anything Google — Gmail does host my university and my personal email, but I avoid it as much as possible.] I whacked “gardeners rest” into the search and it popped up straight away. I then clicked plan route and I knew exactly where I had to go. Did I mention that it showed me exactly where I was by using the phone’s GPS? I was able to follow my whole route on my phone as I went. Try doing that with an A-Z. Twenty minutes later I was there. Problem solved.

So there you have it. I managed to navigate my way to a completely new part of Sheffield just by using my trusty phone. Simples. So what would people have done before technology? Leave me a comment with your ideas.