Just a quick post today as I’m busy, and it’s Wednesday now and I had forgotten I had to write something.

In case you were wondering, my mobile phone is back. Well, my original mobile phone couldn’t be fixed, but it’s been replaced with an identical one. Except that this one is white (my old one was black), making it my second ever white mobile phone.

My laptop battery has out-gassed (again). I wrote previously about how my (then) three and a half years old laptop battery expanded and needed replacing. Three and a half years on, it has happened again. I could share some photos but it looks exactly the same as previously. At seven years old, it’s not worth replacing the battery so it will have to be plugged in for it to work. But my new desktop has mostly made my laptop redundant.

My surround sound system is around 13 years old now. I was at home last week and I heard a crash which I assumed came from upstairs. A few minutes later I smelt something like burnt matches. A bit of investigating found it came from my subwoofer. Taking it apart found some damage to the capacitors, the board and some insulating substance applied to the surface. Talking to a microelectronics expert, the life expectancy of electrolytic capacitors is around 13 years before they start to overheat so it’s right on trend. If I can replace them, I might be able to get it to work again, but the damage to the board (including some possibly caused by me) looks quite substantive. If I can’t fix it, I’ll be adding a new subwoofer to my Christmas wishlist.

For a long time I’d been thinking of getting a new computer. My 6-year old laptop is still pretty powerful and does everything I need it to (I massively overspec’d it when I bought it), but it is laptop and the case is starting to fall apart. Regular readers may remember that it previously had an issue where the battery died and needed replacing. Three years on, and the replacement battery is also no longer able to hold a charge and requires permanently being attached to the wall. However, until my laptop died outright I was unwilling to replace it.

Over the last couple of years, I’ve kept and updated a list of components I would buy if I was to build my own computer. By late 2019, I had decided that late April/early May 2020 would be when I put my plan into action.

And then the lockdowns started to come in. With the factories in Asia shut down, the internet was predicting that computer parts would drop in availability and increase in price over the next few months. This would be exactly when I was planning to buy my new computer. So, in mid-March, I decided to accelerate my purchasing plans and spent a couple of days finding the cheapest places to buy each of the components I wanted.

A week or so later (and several trips to various parcel depots around London), and I had a new computer built and working:

Since the initial build I’ve also added the additional RGB fan at the back and the two vertical RGB strips (mainly to look better). The light strips could be a bit tidier, but that would involve a lot more effort. The only other planned change I would like to do is to move the graphics card to a vertical orientation, but the parts I want to do that aren’t available at the moment.

Speaking of availability, remember how I mentioned that it was thought that availability would go down and prices would go up as the lockdown went on? Well, I’ve kept track of the prices since then (whilst hoping to avoid buyer’s remorse). Here’s my findings normalised to 100% at the price I paid:

It may not be entirely clear from that graph, but here’s the key points:

So did I buy at the right time? From the (incomplete) data I have, yes.

About two months ago, I was getting off a flight and noticed that my backpack (containing my laptop) felt rather warm. I didn’t pay too much attention to it, thinking that maybe my laptop had turned itself on for some reason, or I was just imagining it.

At the hotel, I noticed that my laptop casing was coming apart. I assumed the man in the row behind me had been careless putting my bag into the overhead locker.

I pretty much ignored it until last week when I decided to take a look inside. And this is what I found: 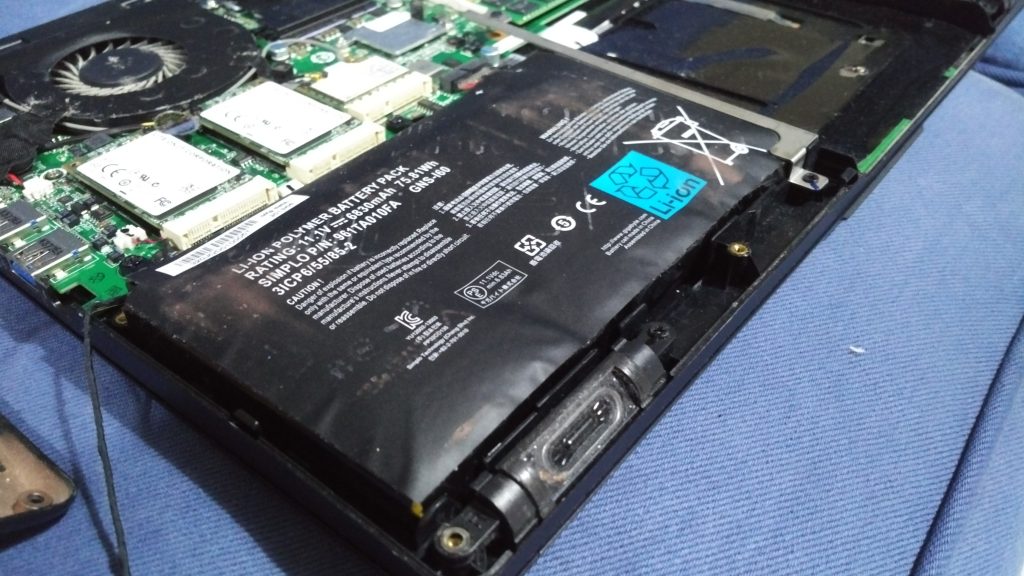 If it’s not that obvious, the battery had expanded to approx 150% of its normal size, and this is what had pushed the casing apart.

I contacted the manufacturer who put me touch with their UK authorised repairer. Unsurprisingly the warranty only lasts one year for the battery (my laptop is now over three years old), however they were willing to sell me a replacement.

Here’s a comparison of the old battery and the new:

And here it is fitted snugly into the laptop: 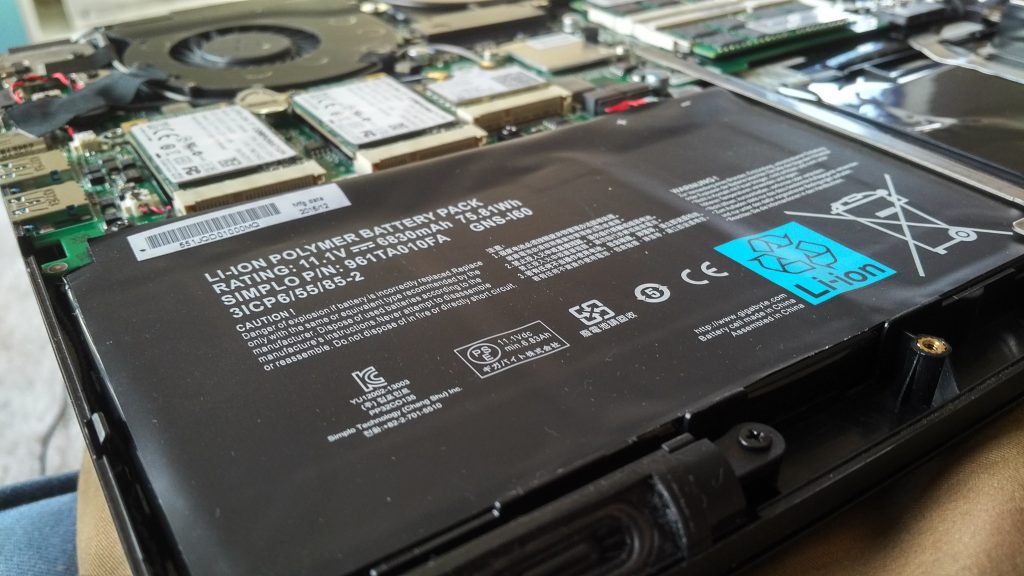 Oh, and I saved myself about £85 by fitting it myself.

(For the observant ones out there, yes, I did take the opportunity to clean out the fans too.)