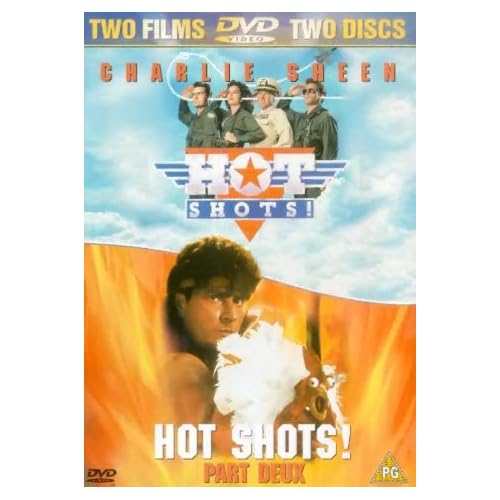 First off, this is obviously two films. The first film was watched on Friday evening, the second one on the Saturday evening. There’s never much on TV on a Friday evening, but this was on Film4 and it stars Charlie Sheen who also stars in Two and a Half Men which is one of my favourite TV shows. I had already seen the second film which I thought was quite funny, so why not watch the first one too? The sequel was on Film4 the next evening so I thought I’d watch it again anyway for continuity.

The first film is a spoof of Top Gun and the second is a spoof of Rambo. Both films are very funny, and it’s not just current affairs jokes, so the majority of this will remain funny into the future. As mentioned it stars Charlie Sheen who I always like and it was good to see him in something different. Although there were elements where I could see elements of his Two and a Half Men character, it just made it that little bit funnier for me. Jon Cryer (Alan in Two and a Half Men) features in the first film and Ryan Stiles (Herb in Two and a Half Men and also in “Whose line is it anyway?”) has short parts in both films. Rowan Atkinson (Mr Bean, Blackadder etc) is in the second film and is as good as ever. Lots of my favourite actors in this, but the ridiculous storyline is what made this film what it was.

They are funny films and definately worth watching again. There are a lot of jokes so I think there’s probably a lot that get missed in a first run through (or even second run through in the case of part deux). They are definately not films to take seriously, I don’t think I would sit down planning to watch them, but if they were on I might give them another viewing. I wouldn’t even worry about only watching part of them, they are so unserious they certainly don’t need to be watched in full to enjoy.